The management of fast rising Ghanaian rapper, Mohammed Ismail stage name Black Sherif, has debunked rumours that their artist ( Black Sherif) has part company with them.

In a press release dated March 9, the Road Boys Association (RBA) noted that reports of the separation including the various interpretations given to some purported documents in circulation must be disregarded.

“Black Sherif is still under his management Road Boys Association (RBA) and has not parted ways as publicized on the various media platforms,” they noted.

“The management of Black Sherif is focused on further developing the talent and brand of the artiste to ensure 1) growth in Ghana and beyond, 2) development of new fanbases, 3) global protection of artiste’s intellectual property, and 4) 100% ownership of artiste’s masters, as aligned with our vision.” 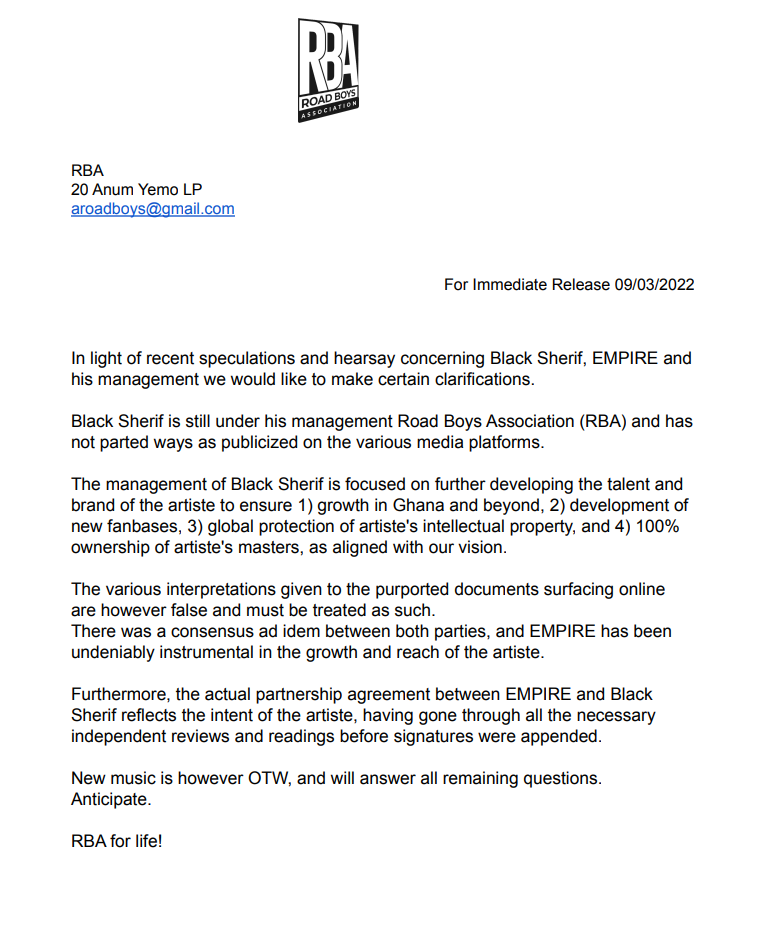 This comes after the fast-rising artiste was criticised for allegedly leaving his investor high and dry to sign with another label.

When the issue reached the court of public opinion, many people bashed the young musician for his actions. But, the manager of Black Sherif, Madonna, in an interview with Da Don on Hitz FM dismissed the claims.

He also revealed that the purported manager accusing Black Sherif of leaving him was only a financier who came on board after the release of Second Sermon.

Meanwhile, the RBA stated that despite claims that Empire Entertainment is taking advantage of Black Sherif, the company has been instrumental in the growth and reach of the artiste.

“The actual partnership agreement between EMPIRE and Black Sherif reflects the intent of the artiste, having gone through all the necessary independent reviews and readings before signatures were appended.”

The management assured fans their relationship with Sherif is well adding that he has new music on the way for fans. They added that any questions fans have would be answered in due time. The press release, however, dropped hints of new music in the offing.