Ghanaian Afropop, Dancehall and reggae musician Livingstone Etse Satekla, popularly known as Stonebwoy, has aired his opinion on the promotion of music in both Ghana and Nigeria.

Over the past week, there’s been a lot of discussion on social media about how Nigerian music has dominated Ghana’s music space. While some netizens blame musicians for not producing music that suit their taste and preference, some musicians have also recriminated industry players for the fall in traction of Ghanaian music.

Shatta Wale during his Freedom Concert blamed Nigerians for the reason Ghana music is not gaining international recognition. He described Nigerian artistes as “stupid” inciting that he doesn’t depend on them for hype.

Stonebwoy has also shared his point on view on the unfair situation which has been hammered by Shatta Wale. The Grammy recording academy board member charged his ‘brothers’ in Nigeria to reciprocate the love and support it receives from Ghana when it comes to entertainment.

According to Stonebwoy, “Shatta Wale’s approach may be wrong but the topic of our brother nation Nigeria not reciprocating the love and support it receives from Ghana is valid and deserves critical attention,” parts of the statement read.

Stonebwoy acknowledging the strength Nigeria has in terms of music dominance, due to their large population among other factors has mentioned that for the sake of Africa’s unity Nigerians should do their best to allow other music from the continent into their country.

“Nigerian brothers must consider that with their great power comes the responsibility of helping to forge a united African front by deliberately allowing music from the other African countries which pollinate Nigerian music to flourish on Nigerian platforms on local and international levels. This approach will enable the African sound to dominate the world as one big family and as a global force. That’s how we stand as one Africa,” he charged. 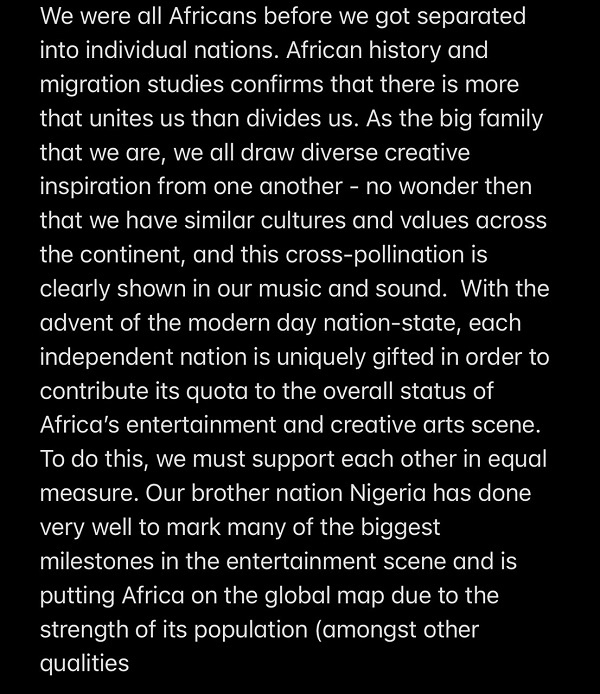 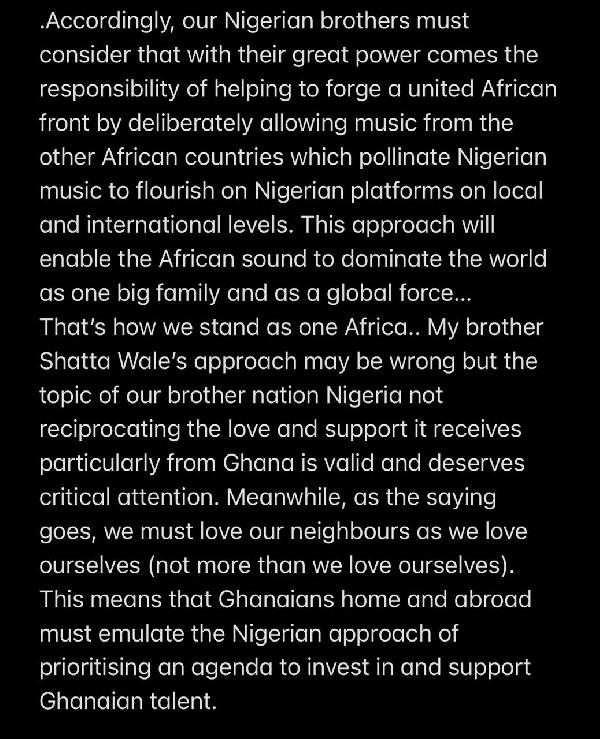